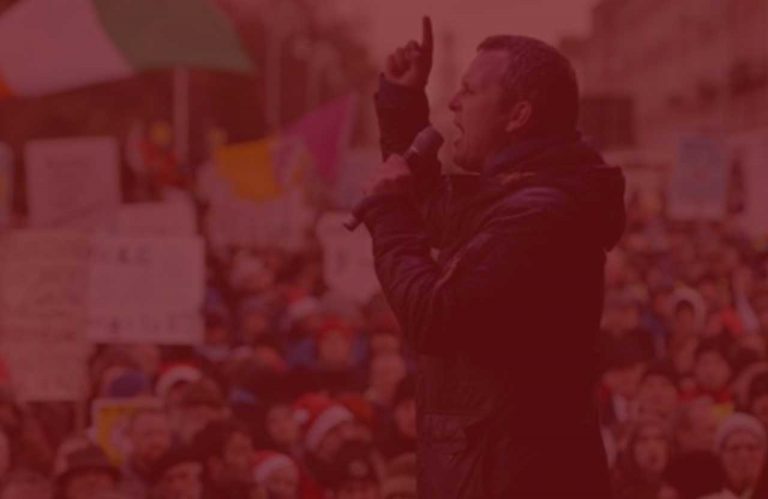 The people have rejected the two right wing parties. Their combined vote fell to just 42% as many rallied to the call Vote Left, Transfer Left.

The parties who gained from this upsurge, Sinn Féin, Greens, Social Democrats, People Before Profit, have a duty to carry through on this mandate by forming a minority left government.

Such a government would face opposition from FF, FG and right-wing independents who would gang up to try to bring it down.

But  it could take immediate, decisive steps to meet demands for change expressed in the election.

It could restore the pension age to 65.

It could impose a ban on all sales of public land and use it for social and affordable homes.

It could impose a rent freeze and stop all evictions of those in economic distress.

It could cut bus fares and move to free public transport.

It could increase the salary of nurses and recruit many more to open hospital beds.

And it could drop the absurd case to prevent Apple handing over the €14 billion that it owes the Irish people.

Such a government would meet with tremendous opposition from the rich and privileged. The mere prospect has started a tremor on the stock exchanges.

However, there is one strength the left has – the mobilisation of people power. The voters who produced this change should be mobilised to support its key measures.

It is vital that the discussions between the left parties do not become a form of shadow boxing, designed to create an excuse to put back Fine Gael or Fianna Fáil into power.

From the very start People Before Profit has argued that no left party should give their votes to propping up a Taoiseach from Fine Gael or Fianna Fáil.

We are at the start of a radical transformation in Ireland – and we must all drive it through.

Let’s start with a mass mobilisation on the pension age. The working people of France have forced their government to retreat from raising the pension age from 62 to 64. We can do the same. That is why People Before Profit is urging the left to come together and call an immediate demonstration to restore the pension age to 65.

Let’s also  mobilise to force through solutions to the housing crisis. We should get out on the streets in large numbers to show our support for a massive programme to build social housing and to impose a rent freeze.

We are living in new times – and we can force though the changes, whoever is eventually in government.

88% Of Workers Vote No To Mandate Tesco Deal

Workers in Tesco have sent a clear message to the company and their union MANDATE: we want real pay increases.  88% voted no to a deal which would have seen premium payments axed and pay cuts for many workers. A disgraceful deal for those who put their lives on the line during the Pandemic. congratulations on defeating this deal but keep organising.

People Before Profit Back Ucu Strikes

People Before Profit back the UCU strike on 1-3 December. For a full pay increase, an end to injustice through discrimination, an end to zero-hours contracts, and for real fair pensions and manageable workloads- get down to your closest picket and show support.

Stop Playing Games With The Protocol

Stop Playing Games With The Protocol

Performance cookies are used to understand and analyze the key performance indexes of the website which helps in delivering a better user experience for the visitors.

Analytical cookies are used to understand how visitors interact with the website. These cookies help provide information on metrics the number of visitors, bounce rate, traffic source, etc.

Advertisement cookies are used to provide visitors with relevant ads and marketing campaigns. These cookies track visitors across websites and collect information to provide customized ads.

Other uncategorized cookies are those that are being analyzed and have not been classified into a category as yet.

Save & Accept
Powered by